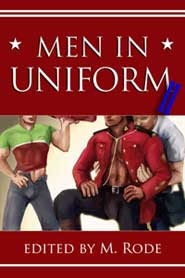 About Men in Uniform????

Oh, they are sexy. When I found out Torquere Press was doing a second Anthology I had to contribute. Woof. I love marines, cops, soldiers of any stripe.

My story is a gritty, science fiction bit, "The Red Jungle." Space Marines! I love 'em. These guys are a second pairing in this universe actually. The first is "End of Service," a little drabble which I'll post the link to at the end of my rambling. I'm actually working my way into my NaNoWriMo project tentatively titled "The Devil in All of Us." It'll be a gritty Sci-Fi as well. These two stories "The Red Jungle" and "End of Service" are world building efforts.

Devil will be pretty edgy. There will be some non-con, force body modification, tenticle sex, death... angsty stuff. It has been gnawing at me for a while to be written. So, I'll use NaNo to do it.

Snippit? You want a Snippit? Okay, twist my arm....

The Red Jungle
By
James Buchanan
God, why was he stuck with all these raw recruits. Rhetorical question that, take a hit, go back to P.T. to recoup and they had to do something with you. Nobody sat idle in a war. Perfect solution, at least in a military mind-fuck, give the walking wounded babysitting duty. As he limped along hunting for idiots out past curfew, Sergeant Joe Ferizzie flicked his gaze across the rows of tents. A green on green on black world bloomed under the lenses of his G-6ucs– Generation Six Ultra Combat Snipers. Technology made the night vision goggles as small as a set of birth control glasses while officering more vision under less light than versions 0 to 5. Military planning made it smaller, but left everything in a DOS prompt color scheme. In Jarhead speak the DOD designation for his night vision goggles translated to: G-sucks.

Joe felt that was pretty spot-on.

The generators’ steady drone washed in a distinctly martial lullaby over the nighttime camp. Discordant, rumbley, back beats came in on the wind from supply vehicles on the move. Fainter still, the whine of faraway artillery crept under it all. Pretty babies, sleepy, sleepy. He stifled his own laughter. Soon, oh too soon, you’ll be moving up front and wondering what the hell hit ya. After a six day recovery from their drug induced transport comas, the fresh meat would be tossed out into battle. If lingering DT’s didn’t kill ‘em, the shock of being dropped into the Red Jungle just might.

Whiny, sheltered kids all of them. They had no blazing clue what was waiting for them out there. Eons from HQ, virtual years from a supply dump and maybe days from your own command post… babies you’re lucky if you get wipies to wipe your ass with much less coffee in the a.m. Shit, they’d be lucky if their issued flak jacket didn’t date from the end of the 20th century. Ferizzie’s own unit used ones with spray painted rust and brown on navy fabric. It covered the So.Cal. Metro S.W.A.T. logo stamped across the back. The only reason they had those was that Joe had written his partner begging for cast off gear. Mike, when they were still speaking, sent him ones the urban defense combat units didn’t consider suitable for service any longer.

Joe lifted his G-6’s and the world dropped into black. Blinking the sweat out of his eyes, the sergeant used the hem of his already damp t-shirt to mop his face before flipping the night specs back down. The weather was spiraling into a heat comparable only to hell. Morale slid lower and lower in inverse proportion to the upward movement of the thermostat. Fights blossomed in the tent cities. The grunts were doing a decent job of keeping them on the down-low. Like any good sergeant, Ferizzie knew all about them. Sometimes it was best not to get involved; let it all shake out on its own. Fights sorted the pecking order of the troops. As long as no one came out unfit for duty, a good leader left it alone.

Damned to drop-grunt purgatory, living the same day over and over again until the reprieve of discharge or death would tax men under the best circumstances. A war on some jungle covered, God-forsaken rock was hardly the best of circumstances. Once they made the show, they’d all find better ways to occupy themselves… like keeping their skin in one piece. Nothing was normal or natural in the Red Jungle. The air tasted like sulfur and the water like asparagus laden piss. Crimson leafed trees seemed to sway without wind. The plants whispered to each other as you passed. Touch the spongy orange bark with bare skin and you’d come away with blisters. He could only hope that the enemy was as bad off the Marines in the Red Jungle. If not, well it’d be a real short tour in this hell-hole.
~~

You can buy Men In Uniform II here: http://www.torquerebooks.com/zencart/index.php?main_page=product_info&products_id=598

If you want to read "End of Sercie" you can find it here: http://www.james-buchanan.com/James%20Buchanan%20End%20of%20Service.html

Posted by James Buchanan at 1:56 PM

I bought it the day it came out :) Loved it!

Thank you. There are some juicy stories in there.