It's Friday in my corner of the world so... 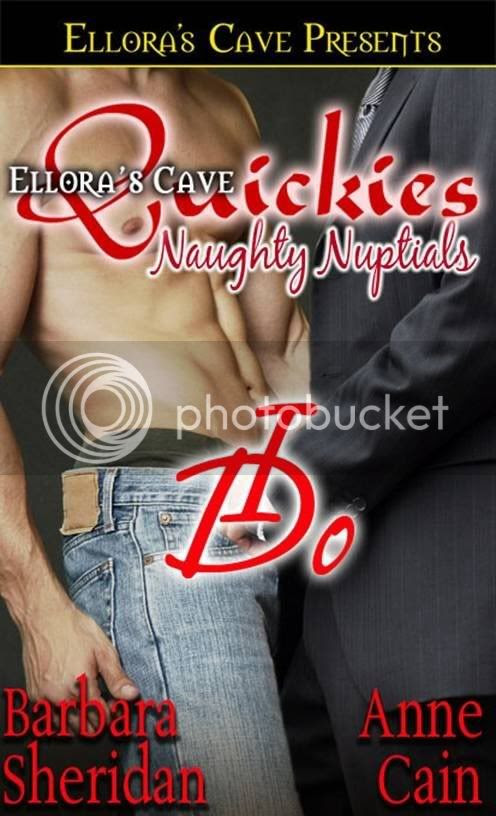 It's time to celebrate the big day for our Ellora's Cave debut with "I Do" part of the Naughty Nuptials Quickies series EC is doing. I thought We'd share another excerpt with you.

Here's a recap of the storyline:

Randy Ohara has been alone and lonely since the death of his first and only lover. While in New York to attend his sister's wedding, he develops an instant and strong attraction to an unknown man at a Manhattan nightclub. The desire he feels is surprisingly intense, making Randy realize he's never wanted another man with such passion before.

It's even more of a surprise when Randy learns that the stranger he lusts for is none other than Jason Chen, the groom's widowed father. Randy doesn't dare make a move on the sexy older man, until the handsome detective reveals a few secrets of his own.
* * * *
And now for the excerpt (you may want to picture Jet Li as Jason Chen --we did ^__^)

* * * *
Jason threw a pillow at his son. “You’re marrying a beautiful girl tomorrow, what do you want to look at a stripper for?”

Dan laughed and threw the pillow onto the bed. “Damn, Dad, you’re older than I thought. You need some Viagra or something?”

“You little shit.” Jason snatched the pillow to throw it again but Dan scurried out of the room laughing his head off. Jason dropped the pillow, the smile falling from his face. He let his hand slide over the front of his baggy sweats. He didn’t need any Viagra ‘cause this sure as hell wasn’t a simple needing-to-take-a-morning-piss hard-on he had in his briefs.

The erection was still full-blown when Jason stepped into the shower a few minutes later and began rubbing the bar of soap across his chest. What the fuck was wrong with him for having a dream like that? He had no right to think Randy Ohara was gay. It didn’t matter to him if the kid was or not but why had he dreamed it? Why did he wish so damn badly that Danny hadn’t woken him up just then?

The jolt he felt when he rubbed the soap lower gave him the answer he needed. He was attracted to Randy in ways he hadn’t been attracted to anyone in a long, long time. Not since that cute little blonde rookie had flirted with him a couple years back. What was
her name? Sharon? No, Susan. Susan Lenzer. He’d be a lying bastard if he said he hadn’t wanted to tap that, but he’d had more sense than to get involved with anyone at work. He’d seen too many guys get jammed up that way, like that commanding officer from the One-Sixteen with twenty years on the job who lost it all because he wanted to bang some rook who decided to get it all on tape.

Win had been on his back, one girl grinding her pussy into his face while the other had begun to tease Jason’s cock with those pretty painted lips of hers. Not wanting his friend to be left out—and being more than a little high from the pot they’d smoked, Jason had knelt and told the girl to scoot under him to blow him while he used his own mouth on Win.

And Jason Chen very much wanted to use his mouth on Randy Ohara now.
Posted by Barbara Sheridan at 12:01 AM

Labels: I Do, New Release

Jason is so masculine and Randy has a strong sense of sophistication and assertiveness to him...I NEED AN EPILOGUE sequel thing!

I love the fact that so much emotion was put into the narrative and the plot was tight too.

Congrats ob your new release. I just bought it, and I'm looking forward to being able to sit down and read it over the weekend.

Anne and I really like these characters and we've started on a sequel for them. There are some inner and outer conflicts that should make things interesting :)

I LOVED this one! Jason and Randy are one HOT couple! Any more of their story in the future?

I LOVED this one! Jason and Randy are one HOT couple! Any more of their story in the future?

YES! Well, it's not been contracted yet but Anne and I are busy with a follow-up where Jason goes to Hong Kong and gets into all sorts of things (besides Randy that is :P)

Thank you so much for reading I Do!