Last week I saw a banner ad at tvguide.com for an As the World Turns love triangle featuring two guys and a girl, and it seemed like the two guys were actually the pairing to root for. Curious, I did a search on YouTube.

Thus, an obsession began, and I spent more than seven hours in a row watching the story of Luke and Noah unfold.

I haven't watched ATWT in twenty years, when teenaged Lily was frolicking with hunky stableboy Holden. They're amazingly still around, and it's their son Luke who's now falling for Noah, a repressed army brat who dates girls and desperately tries to fight his attraction to Luke. The actors do a terrific job -- particularly Van Hansis as Luke -- and the writing is remarkably subtle and incisive. (Granted, you'll also have to suffer through a subplot about some singer and her cliched stalker than involves a field trip to Branson, Mo., but the Luke/Noah story is worth it, trust me.) Maddie, Luke's friend and Noah's short-term girlfriend, is warm and sympathetic, and Holden and Lily are very supportive of Luke. Noah's father is unfortunately turning out to be a bit of an eeeeeevil bastard, but it is a soap, after all.

If you're interested in catching up on Noah and Luke's story, you can find all 64 parts (and counting) here, including their historic first kiss -- the first real kiss between two men in American daytime TV history.

I also wrote some fanfic, because no obsession is complete without it. 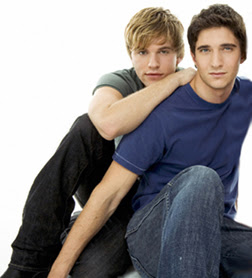 OMGEEEEEEEEE! For the first time since, um, EVER, I'm actually interested in a soap! I was bad and went straight to YouTube just for the kiss scene. *sighsigh*

Thanks for sharing, Keira!

You're so welcome, Anne! I haven't watched soaps in so long, but I'm hooked big time on Luke/Noah. And thanks to YouTube, I don't have to sit through the other storylines. Hell, the fansites even know which days of the week the L/N storyline will appear on!

TiVo is set for tomorrow, which is apparently going to be a very good episode. :D :D :D

OMG - You're evil, Keira. As if I don't slack enough already. I'm going to have to visit youtube. *g*

Omgomgomg...tomorrow is now TODAY. I wonder what happened with L/N!!! *runs to YouTube*

Amanda -- it's only right that I spread the obsession around! *g*

Branson is a great place to check out! They have some fantastic Branson attractions to see!

Need to find a vacation spot? Check this out for a Branson vacation!